There was a 3.5% rise in Canadian home sales in July compared to June and unadjusted activity was up 12.6% year-over-year.

But despite gains – which took sales to around 15% above the 6-year low recorded back in February, sales are still lagging the highs of 2016 and 2017 by around 10%.

The Canadian Real Estate Association says that prices increased too with its National Home Price Index gaining 0.6% month-over-month and 0.2% year-over-year.

The average national sales price (unadjusted) was up 3.9% year-over-year to just under $499,000. However, this is heavily influenced by prices in the Greater Toronto Area and Greater Vancouver Area and without these two markets the average is more than $105K lower at less than $393,000.

Activity advanced in about 60% of all local markets but while the monthly increase was led by Greater Vancouver and Greater Toronto, sales there remain well below levels recorded prior to the mortgage stress test that came into effect in 2018.

Sales were up from year-ago levels in most of Canada’s largest markets, including the Lower Mainland of British Columbia, Calgary, Edmonton, the GTA and Hamilton-Burlington, Ottawa and Montreal.

New listings declined 0.4% in July with increases in Calgary, the GTA and Edmonton offsetting a decline in the Lower Mainland of British Columbia and Montreal.

With higher sales and lower listings, around three-quarters of markets were balanced in July 2019. There were 4.7 months of supply.

The national sales-to-new listings ratio tightening to 59.8% in July from 57.6% recorded in June. This marks its tightest reading and the biggest deviation above its long-term average (of 53.6%) in the past year. 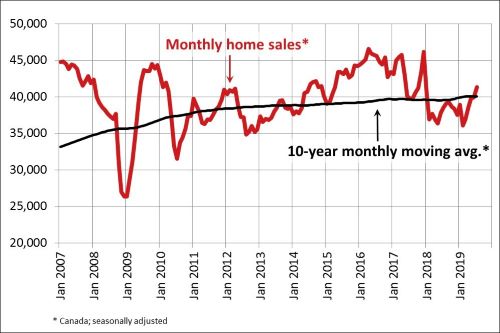